A fictitious layout which portrays a GWR branch line terminus. Set in the 1930’s this ‘O’ gauge layout also serves the Southern Railway and both GWR and SR locomotives together with passenger and goods stock are in evidence. It has a scenic frontage and canal scene. The motive power is a mixture of kit built and ready to run locomotives. Some of the buildings are scratch built.

An ‘N’ gauge modern layout set along the south coast of England. It features a busy beach area with a tram running along the promenade to a yachting marina. Behind the railway station there is a large seaside town with a large hotel and an assortment of shops.

Camlas (Welsh for canal) depicts a GWR branch line based mainly on Newcastle Emlyn, Carmarthenshire. The station and goods yard have now disappeared but in its heyday, goods and livestock traffic were heavy. Typically it handled between 2000 and 3000 tons of coal and 800 trucks loaded with livestock per year. The road system was poor and so most goods were brought into the area by rail. Cattle trucks and fuel tankers are evident along the railway and to emphasize the rural character of the area, a farmer may be seen ploughing his fields with sheep grazing in the nearby meadow.

For the technically minded, the track-work is Peco Code 75, the station building and goods shed are laser cut wood from Timbertracks with Metcalfe buildings in the industrial area alongside the wharf. The butty boat is made from a Langley kit as was the wharf walls. The cattle dock is from Ratio with animals mainly by Preiser.

This layout featured in the August 2015 edition of Railway Modeller.

Chamberlayne Park is at the end of a branch line and this modern image is served by DMU’s with a TMO. It is based in the South of England.

Set in 1946 this post war layout features buildings, cars and lorries of that period. It was built using ‘O’ gauge Bassett Lowke and Hornby modelling.

This ‘N’ gauge spiral layout features double figure of eight tracking and passing loops. It has two stations and is modelled along GWR lines.

This ‘N’ gauge layout takes its inspiration from The Longmoor Military Railway which consisted of 70 miles of sidings in an area 8 miles long and 2.5 miles wide. Although thoroughly researched from an historical point of view, because of scale it is only possible to give an impression of this vast complex. The left hand end of the layout represents Oakhanger, the first station after the interchange at Bordon. The middle part shows some of the siding complexes and the right hand end, the main camp workshops and barracks.

This layout has been previously featured in the Railway Modeller, Model Rail, Backtrack, Steam World and Locomotives Illustrated. 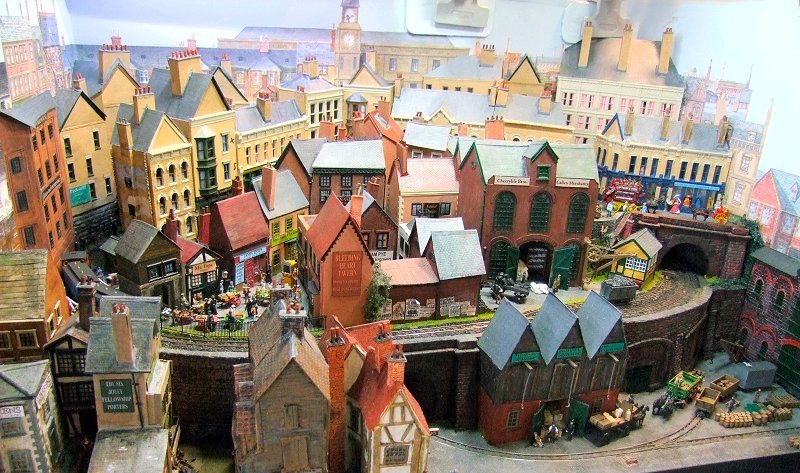 Set in London this fictitious layout portrays on three levels a very congested part of the City. It has a distinct Dickensian setting with narrow streets and alleyways, horse and carts, drays, hansom cabs, omnibuses with people dressed for the period. It also depicts homes, business premises, shops, storage and warehouses, in all about fifty properties set in a complete period jumble. Running through the model a steam train disappears into a tunnel beneath the City only to re-appear along the front again. At a lower level a second steam train runs into a wharf from a tunnel below the City.

A uniquely built in camera captures the train disappearing on a high-level CCTV screen. History is re-created with all the characters of the time, a complete story in miniature.

Many of the buildings have curtains, shop window displays, market stalls with goods, dockside barrels, boxes, warehouses containing bales and a coffin!

Featured in the Railway Modeller March 2012. 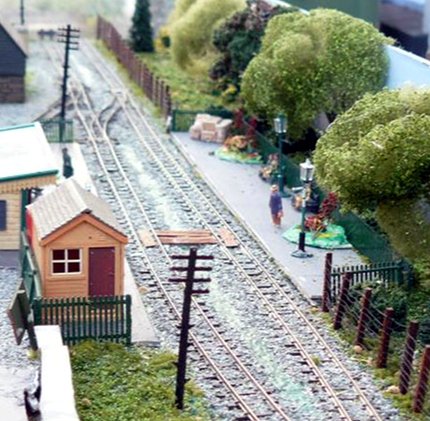 Situated about 600 feet above Lynmouth Harbour, Lynton Station was at the end of a 2ft gauge railway which ran 19 miles across the edge of Exmoor to connect with the standard gauge LSWR network at Barnstable. This layout is modelled in 4mm scale and set in the 1920’s around the time of the change of ownership from the independent Lynton and Barnstaple Railway Co to the Southern Railway. The line closed 60 years ago and although not yet fully operational it is in part operating once again as the Lynton to Barnstaple Railway.

Based on Dartmoor, Devon, this layout is DCC operated with loco sound effects. 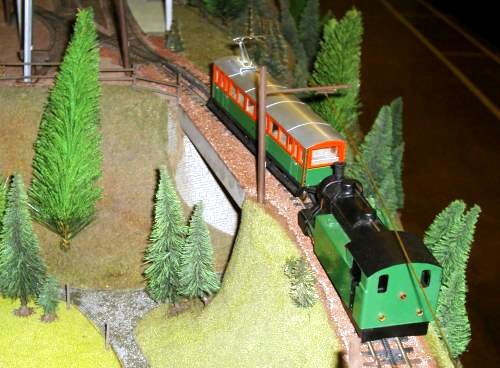 The Saxeten Gemeinde Karren-bahn is set in the Bernese Oberland region of Switzerland around the village of Saxeten. It is a metre gauge rack railway built to a scale of 5mm to one foot – very close to S scale.

The origins of the railway lie in the end of the 1890’s, when the villagers of Saxeten saw the Berner Oberland Bahn (opened in 1890) bring increased prosperity to the villages of the Lutschinen valleys. Accordingly a plan was developed to link Saxeten with Grisalp and Kiental, with a railway running towards the Rengglipass. To leave their options open the promoters only registered the initials SGK but as so often happens with railways of fancy, the funding ran out before any tangible mileage was built. The villagers were left with a few metres of track and a desire to make something useful of a questionable legacy.

The annual rainfall in the Saxeten valley provides the means via hydro-electric generators to run an electric railway and the villagers used this resource to provide themselves with local transportation. In the tradition of under-funded railways, the railway made use of stock cast off by the other mountain railways in the region. The railway adopted the slang name ‘Saxeten Gemeinde Karren-bahn’ from its initials, which translates as Saxeten Community Barrow Railway.

The model uses rack assistance to negotiate the steep inclines. All the stock is scratch built, and the locomotives use Fleischmann, Hornby or hand built chasses. The track is a mixture of hand built and proprietary.

Please note – in the real world, there isn’t a railway in Saxeten. However other similarly fanciful railway schemes in the region were proposed in all sincerity.

Layout featured in the February 1982 edition of the ‘Continental Modeller’.

The aim of the shunting puzzle is to shunt the numbered wagons into a consecutive order in as few moves as possible.

Wimborne Station represents the line from just east of the low narrow bridge at Leigh Road to west of the Stour Viaduct, just short of Lady Wimborne’s Bridge. The station is to scale and all major items on the model have been built as authentic as possible and placed in historical context. The trains date from the mid 1950’s to the end of passenger services in 1964. Two crews of five ensure that there is lots of movement on this layout with trains running continuously, shunting, entering and leaving the yards.

For the technically minded the track and turnouts are hand-built using code 75 rail. It is built in ‘00’ scale but with 14.5mm back to backs.

A varied display of model engineering and model making which includes amongst other models, a beam engine, locomotives, horse drawn vehicles and marine applications. 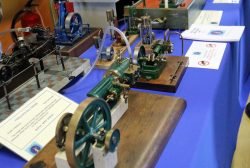 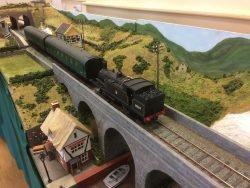